RC-Timing 2004 Is Now Available, with these new features

Spectator Display Output
RC-Timing now allows you to connect extra monitors to your race control computer for spectators, drivers and pit men to watch. The display on these extra monitors is totally different to the main race control screen, using a specially chosen large font, so the displays can be seen from a much greater distance. And all of this can be done using standard computer monitors; no expensive hardware is required! Laptop computers already have an extra monitor output that can be used for this purpose. For a desktop computer, all you need is an extra graphics card costing around £10. Check out the 'Spectator Displays' section of the new User Guide for help on setting up these displays. 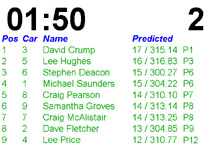 Practice Lap Timing
RC-Timing now allows the AMB lap counting equipment to be used during free practice, so anyone with a personal transponder (or a handout transponder borrowed from the club) will automatically have their laps timed. RC-Timing shows the practice laps on an extra monitor (see screenshot below) and the main screen, so both race control and spectators can instantly see the lap times of all the drivers practicing. A printout can also be produced at the end of practice, which even calculates each driver's 'best run', so you can see who was quick over five minutes, as well as who was quick over a single lap.

BRCA Touring Car 2004 Finals Tie Breaking
RC-Timing now allows multi-leg finals to be tie-breaked according to BRCA Touring Car 2004 rules, which specify that the total laps and times from all final legs will be used to resolve any ties. With 8 of the 14 BRCA meetings being run with RC-Timing, we are sure our customers will find this useful!

BRCA 1/10 Off-Road Round-By-Round Tie Breaking
RC-Timing now automatically used BRCA 1/10th Off-Road rules to resolve tie-breaks in Round-By-Round qualifying. These specify that in the event of a tie, the position will be resolved firstly by comparing the single highest finishing positions, and then the best laps and times from those rounds. With more and more national and regional level off-road clubs choosing RC-Timing this is certain to be a timesaving new feature.

Rolling Starts
During qualifying you can now use rolling starts. This is especially useful for IC meetings where cars warm up before the race and continue lapping the circuit as the race starts. This option turns off the staggered start numbers, but ensures that each cars time starts only when they first cross the loop.

Include Specific Member Types In a Championship
Does your club only give points to club members? Or would you like to set up a separate senior and junior championship? Well with RC-Timing this is now possible, as you can specify exactly which member types score points in any given championship.

F1 Style 'Gaps' Display
Have you ever watched full size motorsport on TV and found it useful when they showed how quickly one driver is catching another? You can now enjoy this feature at your RC race meetings as well. A new panel on the race screen shows you the gap between each car and the leader, and also to the car in front. This information is also shown on the spectator displays during finals. Great for spectators to watch and commentators to shout about!

USA & Canada Frequency Support
RC-Timing can now be used throughout North America with the addition of 75Mhz crystals. Just select 'USA & Canada' for the region in the Settings screen.

More Sound Adjustments
You can now have warnings at 2, 5 and 10 minutes before the next race, great for club meetings where you want a big gap between races but would like to leave the computer on automatic.
RC-Timing also now allows you to adjust the gap between cars when using staggered starts, useful for spacing cars out more on bigger circuits such as 1/8th tracks.

Improved Looks
All RC-Timing Meeting, Archive and Championship files now have their own coloured icons, making them stand out much better in Microsoft Windows. You can also double-click any RC-Timing file from within Windows Explorer and it will automatically load up in RC-Timing, making managing multiple meetings and championships even simpler.
RC-Timing 2004 also has a new, blue-coloured toolbar making it stand out from the previous 2002 version.